Experiments with foxOring micro transmitters using antenna 2m long or less, showed that a very short tuned, resonant antenna could be usefully detected over far greater distance than expected. As a result, various options to match a simple 5m wire antenna were investigated.

At 80m, any antenna using a wire length of  8m or less , has a high input reactance with a very low radiation resistance.

I use the ‘L’ match network as published by AA3SJ.  The is a cut-down version of the popular ‘T’ match.

Operating with a single frequency & fixed ‘short’ antenna less than 8m long, we only require a  transformation from low  impedance output (Tx)  to high impedance antenna . The ‘T match’ circuit can be simplified, using a coil with a fixed number of turns and a single series capacitor. The variable capacitor can be a low cost poly type  (about 200pf) . A high voltage can develop across the variable capacitor. It was found that the two small trimmers on the back of the variable capacitor were prone to arching over, so it is recommended that the rotating vanes in the trimmers , are removed before assembling the ATU. 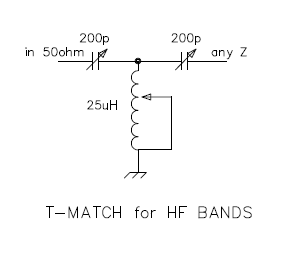 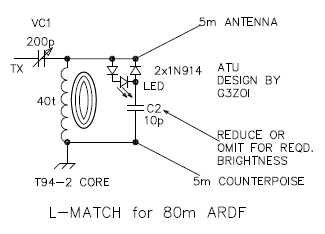 The ‘L’ match was built into a 80m transmitter as shown. It shows how a wider box (AB23) can accommodate an integrated ATU. 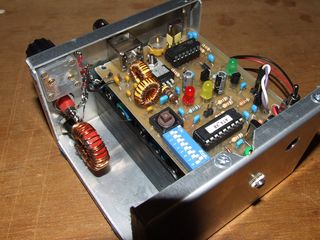 Using the ‘L’ match, with a MFJ current meter, an RF current of 150-180mA was measured.
The LED tuning indicator is from a design by Peter Zenker DL2FI. The 10pf capacitor was removed to make the voltage peak more obvious.

A 6m roach pole is used to ‘lift’ the 5m antenna wire to a suitable tree support, with a specially designed hook bent from a wire coat hanger or similar guage wire.  The hook slots in the highest hollow section of a roach pole. (The top section is solid, so first needs to be removed).
A firm tug on the wire will un-spring the hook from its support ( watch-out for the falling hook!! ) 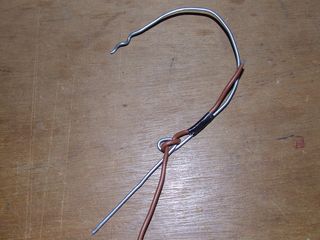